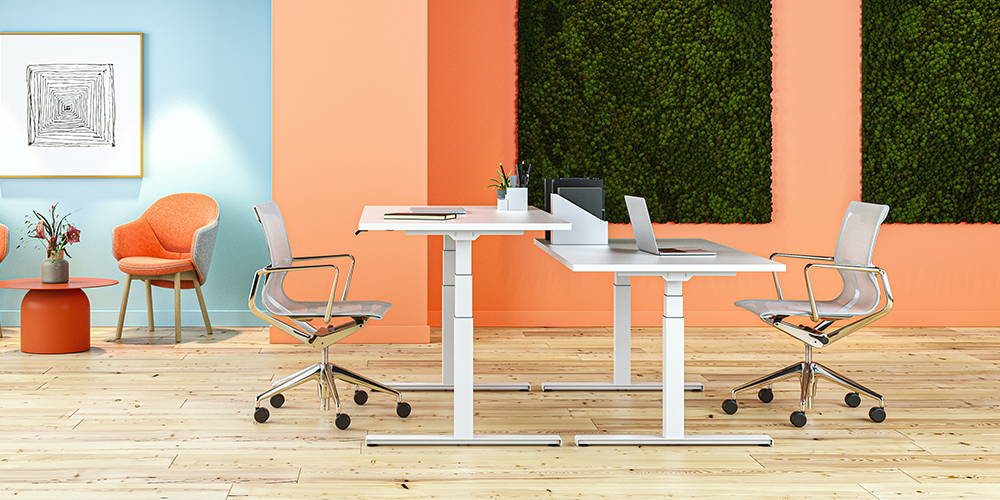 How much do you sit per day? 8 hours straight throughout a typical work day? If this represents you, a standing desk could be a worthy investment. Wait a second, before you make up your mind, let's dive deeper into some stunning scientifically proven facts of standing desks.

A Brief Background to Keep You Informed

A medical report in 2011 revealed that people who live a sedentary lifestyle have a higher chance of dying from heart disease, and a correlation between long-time sitting will also increase chances of developing diseases such as spine disease, obesity, diabetes, etc.

For employers who care for their well-being, access to standing desks has become a prominent issue in the workspace. In order to improve the work efficiency and retention rate of employees, companies have been investing in standing desks. This has led to many benefits such as reducing the number of sick days, and the potential medical expenses in the future. Companies have seen standing desks as a revolution of the health of their employees.

With the growing number of employees working from home, many benefits are discovered from one of these engineering marvels for your work. Not surprisingly, many people still hold concerns about the value of a standing desk. Is it worth buying a standing desk at home, and what do standing desks really help with?

Let's reveal all those answers for you now! 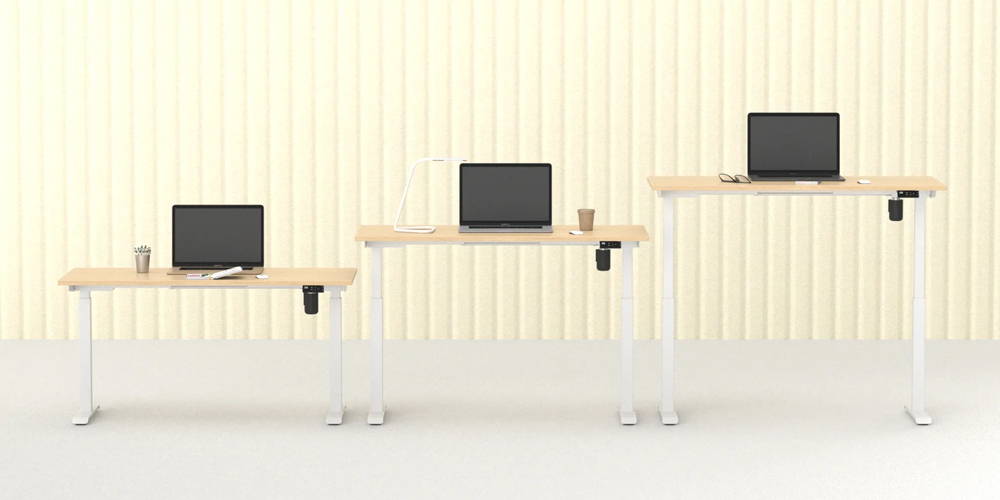 The Growing Trends of Ergonomics

Standing desks have emerged as one of the fastest-growing employee benefits in U.S. workplaces, according to a June report of 2018 from the Society for Human Resource Management. The group's annual survey of HR professionals found that 44% said their company this year is either providing or subsidizing the use of standing desks, up from 13 percent in 2013. 53% of the participants in the U.S. Urban Residents Survey believe that electric standing desks can improve work efficiency.

In recent years, Internet giants such as Google, Apple, and Facebook in North America set off a craze in the tech sector, desks, and chairs based on ergonomic design concepts. Apple CEO Cook said in 2017 when the company opened its new office headquarters, Apple Park, that long-term sitting is like cancer that harms people's health. They have provided 12,000 employees throughout the company with 100% electric adjustable desks for office work to protect health and improve work efficiency at the same time. Data analysis software giant Tableau, equipped the company's 1,200 employees with electric standing desks. Even as early as 2013, Facebook had more than 250 employees using electric standing desks, and the concept of a healthy office has been there for a long time.

In St. Louis Park in America, an entrepreneur said the extra expense with height-adjustable desks was worth it, especially when it comes to recruiting and retaining millennial workers.

“I think it's a happier perspective when I'm standing,” said Tim Hoeppner, 56, of Apple Valley.

It's not known what share of office workers are using sit-to-stand desks. Peter Segar, chief executive of Ergotron, an Eagan-based maker of adjustable furniture, puts the figure at about 2%. Even so, Segar said standing desks constitute the biggest change in office furniture since the dawn of the cubicle in the 1960s.

“Sit-to-stand really does change the way people work,” he said. “They're more dynamic. They're up-and-down. I think it's easier to collaborate with people.”

There's a growing number of devices that convert a regular desk into a sit-stand workstation. In Minnesota, 58 percent of respondents to the recent Human Resource Management survey said their companies use standing desks. Many are adopting the furniture as they expand into new office spaces or renovate old ones, said Paula Storsteen, director of interiors in Minneapolis-based HGA Architects and Engineers. 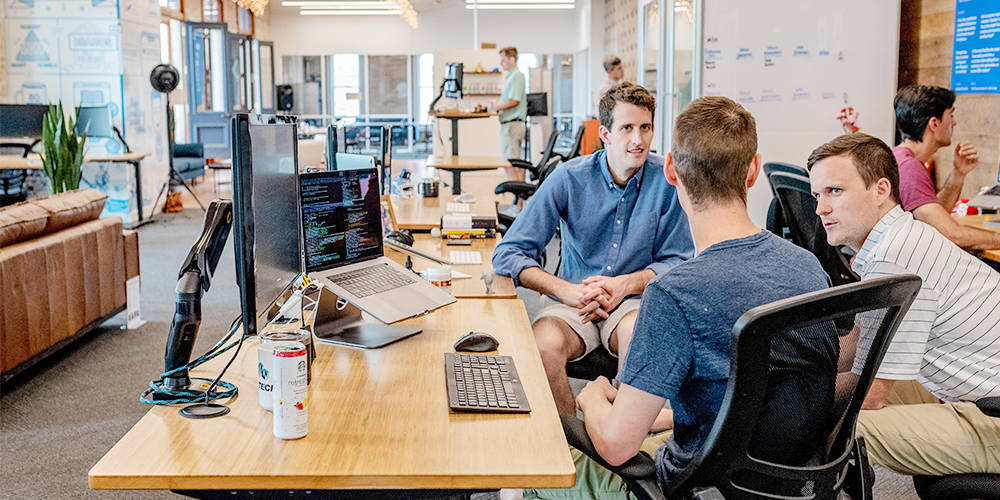 What is a Standing Desk?

So what is a standing desk and how does it work?

A standing desk is also known as a stand-up desk, height-adjustable desk, or a sit-stand desk, which allows office workers to stand or sit comfortably at any time.

The lifting of standing desks depends on the expansion and contraction of the state-of-the-art lifting columns of the frame, and the range of its lifting mainly relies on the length of the column. There are generally three types of power for the standing desk to adjust the height, manual-crank, pneumatic, and electric.

The most advanced version is able to electronically adjust between sitting and standing at the touch of a button. However, as such a smart technology, standing desks can become quite expensive. 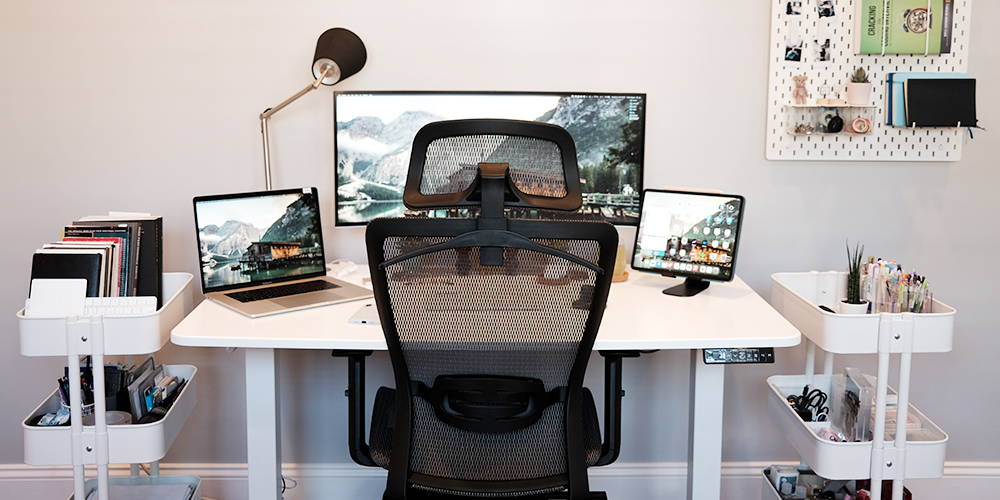 What are Scientifically Proven Facts of Standing Desks?

Studies found that there was a close link between increased sitting time and early death. Considering long-time sitting has a strong connection with type 2 diabetes and heart disease, this is not surprising. In fact, a review of 18 studies found that people who spend more time sitting had a 49% higher risk of dying early in their lives than people who spend less sitting.

Another study estimates that reducing the time sitting by 3 hours a day can increase the average life expectancy of Americans by 2 years. Although these observational studies do not prove causality, there is sufficient evidence that standing more can extend our lifespan.

Major scientific experiments have shown that the more blood glucose levels rise after a meal, the worse your health. This is especially true for those with insulin resistance or type 2 diabetes.

In a small study of 10 office workers, after standing 180 minutes after eating their lunch reduced blood sugar was reduced by 43% compared to sitting at the same time. The two groups were in a controlled environment, suggesting that the smaller spike in blood sugar rise was due to standing after a meal, rather than the extra body movements of office workers. Another study involving 23 office workers, found that alternating between standing and sitting every 30 minutes reduced peak blood glucose by an average of 11.1% throughout the working day.

The harmful effects of sitting after a meal may help explain why abnormal sedentary time is associated at a 112% higher risk of type 2 diabetes.

Fact #3. Stand Up More to Decrease the Risk of Heart Disease

Did you know that sitting was considered bad even traced back to early modern times? The idea that standing is good for heart health was first proposed in 1953. One study focused on bus conductors found that those who stood all day had half the risk of heart disease-related deaths compared with colleagues sitting in the driver’s seat. Since then, scientists have gained a deeper understanding of the effects of long-term sitting on heart health. Long-term sitting can increase the risk of heart disease by as much as 147%. Many harms of living a sedentary lifestyle that even an hour of vigorous exercise could not make up for the negative effects of sitting all day. There is no doubt that spending some time standing in a day is good for heart health.

After a long exhausting day at the office, does your back hurt? Most likely. Back pain has become one of the most common complaints of office workers who sit at a computer all day. To determine whether a standing desk can improve this situation, scientists have conducted multiple studies on employees with chronic back pain. Research reports show that long-term sedentary office workers can relieve their lower back pain by as much as 32% after using a standing desk for a few weeks. Another study released by the Centers for Disease Control and Prevention found that it took only 4 weeks for working people who use sit and stand desks to reduce their upper back and neck pain by 54%. In addition, after removing the standing desk from the office, back pain will reappear within 2 weeks.

A magic energy booster? A well-deserved title indeed for standing desks. In a 7-week study, participants using standing desks reported less stress and fatigue than those who sat all day. In addition, 87% of those who use a standing desk said they have increased their work energy throughout the day. But after returning to the original desk, the overall office mood returned to its original level. These findings are consistent with more extensive research on the effect of long-term sitting on mental health, which links sedentary time with increased risk of depression and anxiety.

A common misconception regarding standing desks, is whether or not it hinders daily work tasks, such as typing? Of course, it may take some time to get used to stand-working after lunch, but using standing desks does not seem to have a significant impact on typical work tasks. In a study of 60 young office workers, using standing desks for 4 hours a day did not affect the number of characters they typed per minute or errors of typing. If your productivity and energy level changes at all, it can only be increased instead of decreasing by a well-engineered standing desk. 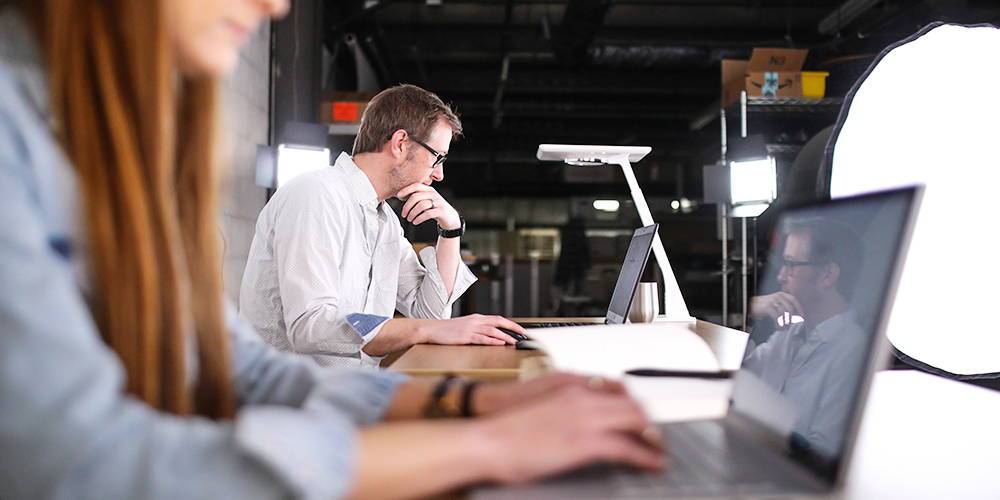 Can I Use a Standing Desk to Lose Weight?

The answer is yes, but the result can be disappointing if you merely rely on standing. Findings indicate that standing can lower our risk of weight gain and obesity because compared to an afternoon of sedentary work, an equal amount of time spent standing has been shown to burn more calories.

Therefore, if you want to lose weight just by using a standing desk, you have to do a lot more than standing around doing nothing. There’s no shortcut in losing weight in a healthy way. Here’s a pro tip: try to take advantage of your standing desk right after consuming a meal, as that would be the perfect golden time to burn calories.

This is what researchers published in the Journal of Physical Activity and Health tried to explain. They put masks on 74 healthy people, which can measure their oxygen consumption as a reflection of how many calories they burned while doing computer work, watching TV, standing, or walking on a treadmill.

Here is the truth of standing desks they found for weight loss:

In other words, using a standing desk for three hours will burn an additional 24 calories, which is approximately equal to the number of calories in carrots. However, walking for only an hour and a half during lunch breaks may burn an additional 100 calories per day.

Based on the above research, we can find that when working in the office or at home, the calories we burn from sitting for a long time is almost the same as standing up for the same time. 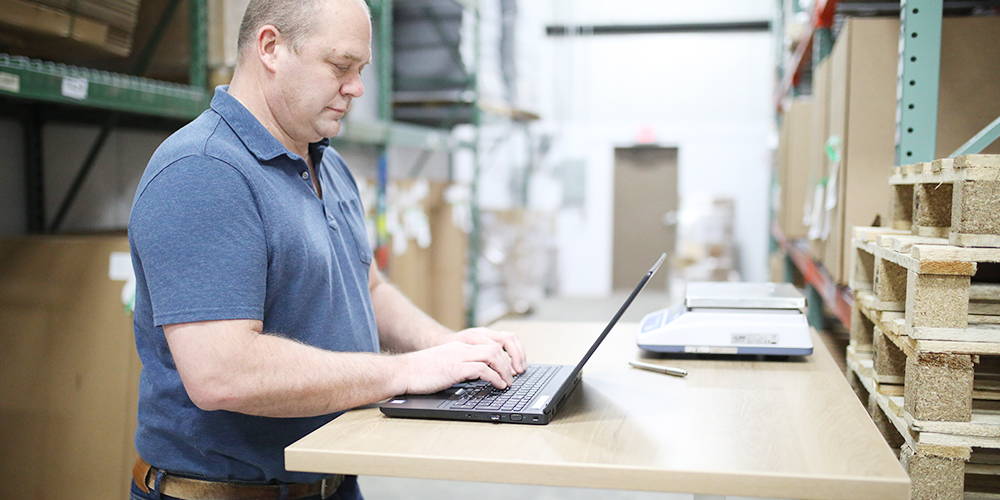 The truth is, standing can help us beat inactivity and have positive effects not only in our mindset but also in our physical being. Although the name “standing desk” seems to put a seed of “all-time-standing”, let’s not forget the right purpose of standing desks with the flexible “height adjustable” functionality - to achieve a perfect healthy balance between standing and sitting.

Now you have found the final answer: a standing desk is worth investing in for a WFH worker or just anyone who needs to deal with sitting throughout the day such as software engineer, accountant, IT worker, artist, graphic designer, just to name a few.

Now, if you have made this far educating yourself those facts all about standing desks, why not give it a shot? Remember, AiTerminal will always come to your rescue. Break free from the endless sitting and back pain and become a part of this revolutionary sit-to-stand movement today.

Your cart is currently empty.

Continue Shopping
-
Total price $0.00
Shipping Taxes and shipping fee will be calculated at checkout
View Cart
You have successfully subscribed!
This email has been registered
Close